According to the latest version of the proposal, operators of carbon removal systems will be able to log carbon taken and stored deep in underground rock formations.

This would also account for carbon stored in terrestrial areas such as forests and soils and in ‘sustainable products’ – these are not yet defined but could include wooden buildings as ‘stores’, for example.

But the EU regulation sets up the operation of a certification system without presenting any details on what will be considered permanent carbon removal and how long the carbon must be stored to be counted, experts say. environmental.

Carbon capture and storage, the process of capturing carbon before it is released into the atmosphere, would be considered “permanent disposal” under the EU proposal. However, CCS does not meet the EU’s criteria for carbon removal, which defines it as carbon taken out of the atmosphere and not just capturing new emissions.

In an open letter published on Monday, a group of eight environmental organizations said the EU was wrong to give prominence to technologies such as carbon capture and storage, which were “not currently viable on a large scale. scale and pose potentially enormous social, environmental and economic risks”. and the costs related to their very high consumption of energy and resources as well as the transport and storage of carbon dioxide”.

The question of removing carbon from the atmosphere has gained prominence as it becomes more evident that the world is unlikely to be able to keep rising temperatures “well below 2C”, and ideally 1.5C, defined in the Paris climate agreement.

Temperatures have already risen by at least 1.1°C and emissions have continued to rise globally despite efforts by developed countries to reduce dependence on fossil fuels and develop cleaner energy sources.

The nascent markets for carbon offsets already allow companies to buy against projects that claim to have reduced or absorbed emissions, such as growing trees or conserving oceans. Scientists and climate experts deem them imperfect because they are difficult to monitor and prevent companies and governments from working to reduce the original sources of emissions.

The EU carbon offset certification framework would be the first government effort to set a standard for such initiatives.

The field is very complex to regulate, because the accounting methods must guarantee that the carbon taken is additional and verified, and that it is kept permanently in storage. 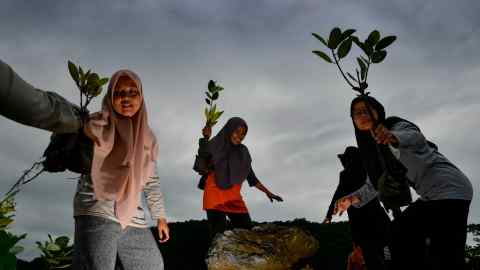 Relying on forests to store carbon, for example, can be problematic if there are widespread forest fires, as there have been in Europe and North America, turning trees into a source of carbon emissions.

Earlier this month, a coalition of seven environmental organisations, including the European Environmental Bureau and WWF, sent a letter to the European Commission warning that “the differentiation between permanent and short-term storage is essential, and short- or medium-term carbon “stocks” (such as bio-based building materials, plastics or textiles, usually usable for a few decades at most) should in no way be equated with permanent storage”.

The EU document says ‘permanent storage’ should include systems that remove carbon and store it for ‘several centuries’. Carbon storage products must be “sustainable”, he said.

The commission was also due to issue a directive on green claims this week, intended to require companies marketing certain products as “green” to justify their advertising, but had to delay its announcement, according to three people involved, due to the complexity of defining and apply such a system. The commission declined to comment.

Curious about the FT’s commitments to environmental sustainability? Learn more about our scientific goals here