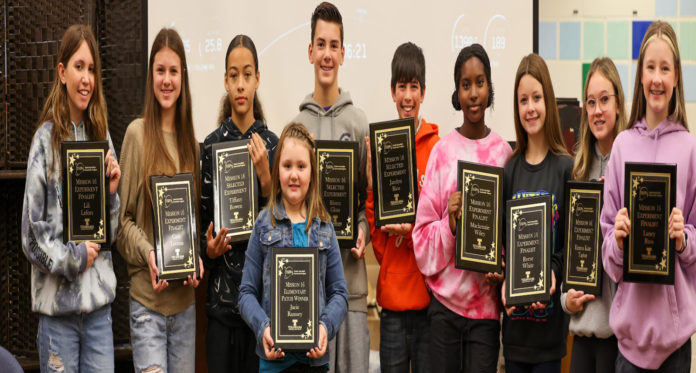 On Saturday, November 26, three Texas Middle School students had their experiment launched on Mission 16 to the International Space Station. Mission 16 also included two patches celebrating the TISD experience.
Texarkana’s Stage 1 Review Board carefully reviewed the 142 projects submitted by Morriss Elementary 5th graders and TMS 6th-8th grade pre-AP students. The final three teams sent experiments to the Smithsonian in Washington, D.C., last year to be judged by the SSEP in the Stage 2 review. Twenty-two communities across the United States and the world are participating to this process, and the committee can only choose 22 experiments to fly to the International Space Station.

The SSEP committee in Washington chose the Team Chicken Strips design proposal submitted by current 7th graders Tiffany Bowen, Rivers Glass and Jaedyn Rios. Their proposal was “The Effects of Space Travel and Microgravity on Hybrid Brine Shrimp (Sea Monkey) Eggs”. The purpose of this experiment was to see if Sea Monkey eggs can withstand space travel and microgravity conditions on the ISS to see if brine shrimp will benefit future missions as a possible food source for long assignments.

Marcy Kelly, science professor at TMS, reflected on the process and said: “When the idea was presented to me by the group, I was impressed with the research they had found on this proposal and very excited. to see the result.”
After a few months of delay, the students had a videoconference with a staff member from Nanorack, a company that works in the privatized management of payloads to space, both on the ISS and with the deployment of satellites, to prepare samples for their experiment. They had a step-by-step hands-on experience of sterilizing FME (Fluid Mixing Enclosure) mini labs. The students then carefully placed 5 grams of hybrid brine shrimp eggs in two secure mini-labs. The students sent a controlled FME mini-lab to Nanorack in Houston, TX, which Nanorack then handed over to NASA for onboarding. The second FME mini-laboratory remains on earth for future comparison with results from space.

Kelly added: “[W]I felt that [participation in the SSEP process] could change the way students thought about science and also challenge them to think like real scientists with real research and data.
The other two teams whose experiments were sent for Stage 2 review included:
current 8th graders Laney Russ, Emma Kate Taylor, Reese White and Mackenzie Wiley. Their proposal was titled “What are the effects of microgravity on the growth of a Fragia X Anannassa?”
current freshmen Lili LeFors, Catie Loomis and Maya Olson. They presented a proposal on “The effects of microgravity on the crystallization of perovskite solar cells”.

A 10-person TISD and Texarkana Community Patch Committee selected two student patches, which were also sent to space on Mission 16. Mission 16 astronauts will sign the patches before they are returned to the winning students when they land on earth.
Texas High junior Astrid Cabrera was the second winner of the Mission 16 patch contest. The primary winner was Spring Lake Park 2nd grader Jacie Ramsey.

The Student Space Experiments Program (SSEP) was launched in June 2010 by the National Center for Earth and Space Science Education (NCESSE) in strategic partnership with Nanoracks, LLC. Designed as a model initiative for national science, technology, engineering, and math (STEM) education in the United States, the program gives students from a participating community the opportunity to design and deliver real microgravity experiments to fly in low earth orbit. SSEP is about immersing and involving students and their teachers in all facets of science. This program allows students to experience science and conduct meaningful experiments.

SSEP provides each participating community with a research asset – a certified flight attendant. These guides help students develop a microgravity research mini-lab and provide guaranteed launch services to transport the mini-lab to the International Space Station, where astronauts operate it. After a typical stay of 4-6 weeks in orbit, the experiment will be returned to Earth to be harvested and analyzed by the community’s student flight team.