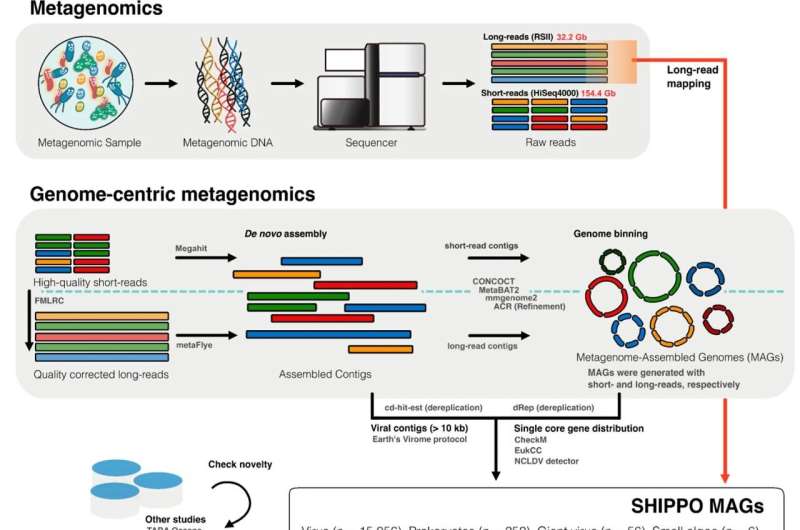 Scheme of meta-epigenome analysis of ocean surface samples. A schematic overview of meta-epigenomics. Meta-epigenomics using genome-centric metagenomics from the approach of binning short-read and long-read assemblies, followed by the identification of epigenetic signals of genomes from long-read mapping. Credit: Microbiota (2022). DOI: 10.1186/s40168-022-01340-w

DNA methylation is a biological process by which methyl groups are added to DNA (genetic material). It is used as an epigenetic, i.e. non-genetic, strategy by prokaryotes to perform an array of functions such as gene regulation, repair and protection against viral invasion using restriction-modification (RM), which function as prokaryotic immune systems.

Until recently, studies related to DNA methylation were limited to microorganisms that can be grown in the laboratory. This has led to a misunderstanding of its role in microbial ecology. It is therefore essential to conduct genome-wide epigenetic studies of environmental microbes, especially those that cannot be cultured in the laboratory, but only grow under natural conditions.

To this end, a team of researchers led by Prof. Woo Jun Sul of Chung-Ang University and Dr. Hoon Je Seong (currently of Macrogen Inc.), South Korea, explored the differences in methylation patterns of DNA between different members of the microbial ocean. communities in the northwest Pacific Ocean.

Their study was published in Microbiota.

“[The] The extensive DNA methylation project only started in 2014, with the release of long-read sequencers. This aroused our curiosity and we wanted to apply it to microbial ecology. Therefore, we used a metagenomic approach to explore DNA methylation in a community rather than at the level of an organism,” says Professor Sul while discussing the motivation behind their study.

The turmoil began in 2015, when the large-scale Shipborne Pole-to-Pole Observations (SHIPPO) project was launched by the Korea Polar Research Institute. This involved filtering microorganisms from ocean surface samples at 10 different stations from the Pacific Northwest to the Bering Sea.

After further analysis, the team was surprised to find that almost 95% of the sequenced proMAGs belonged to new taxa that could not be classified using existing genomic databases. “This discovery clearly demonstrates the potential of this technique and how it could provide new insights into the genomes of non-culturable ocean microbes,” says Professor Sul.

Next, the team used this approach to explore the diversity of DNA methyltransferase (MTase) enzyme classes expressed by the genomes identified in the SHIPPO database.

They found that MTase II was the most common class of MTase expressed in these organisms. Interestingly, most proMAGs lacked complete RM systems due to the lack of restriction enzymes. Additionally, the identification of methylation patterns across the ocean microbiome revealed unique DNA methylation patterns, which ultimately led to the discovery of a distinct methylation profile in alphaproteobacteria.

Next, the team used single molecule real-time sequencing (SMRT) to observe methylation patterns in Pelagibacter. They discovered heterogeneity in the methylation profile of bacteria even at the “strain level”. This implies that dynamic cellular events occur within Pelagibacter in the surface waters of the northwest Pacific Ocean.

These discoveries have already paved the way for a new era of meta-epigenomics, which directly measures methylation in environmental microbes. The potential for studying the epigenome of various organisms at once is considerable.

Professor Sul says: “Along with studies aimed at identifying the methylation patterns of strains exhibiting true pathogenicity, our study is also helping to uncover candidate targets to prevent pathogenicity in the environment. This can be of immense importance to global public health systems in detecting pathogenic signals that threaten human health.”